Well, here it is Christmas Day!!!

So much has happened since the Sydney Fringe Festival finished. Well, I now have a show in the Short + Sweet Cabaret Festival Sydney – a festival where each act has to be 10 minutes or under.  (See more details on each of the acts in the festival here) 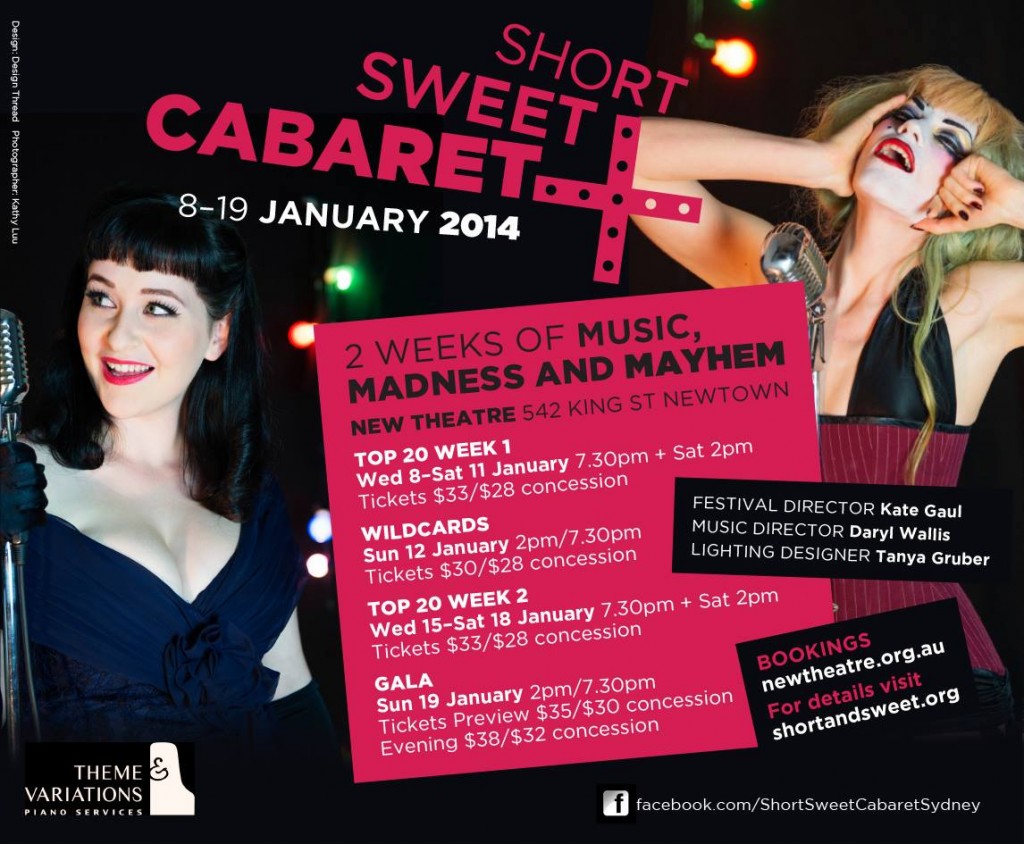 Of course, I’m still working on it! I’m still writing the patter, and rehearsing the songs…in fact, I’m still deciding between 2 songs for my third one. AAAND…in what may amount to an act of utter ludicrity, I am flying to Adelaide for the Cabaret Summer School  – only flying back the day before my Short+Sweet show!! I’m very excited about it actually, as I have been interested in cabaret for quite some time, but am a total noobie. This workshop will give me some skills, enable me to rub shoulders with like-minded cabaristas, and refine the show itself. I will obviously be writing about the course here, so stay tuned!

So far this is the concept of my show, which is called ‘Trashtastika Rises’:

Do you ever feel cursed by your humility? Unable to get ahead and break out of your rut, especially if you want to do something more “Artistic”? Sometimes our lack of self-belief can hold us back – or is it the vice-like grip in which our jobs hold us? See how one self-effacing gal struggles with these issues – and finds her evil-twin Trashtastika has a thing or two to teach her.

The show idea started with a fabulous song I discovered this year, “Phoenix in the Sky”, by an amazing rock musical-writing duo, Paul Leschen & Fred Sauter.  It comes from one of their musicals, ‘Karma Kills’ – but their best known musical would be ‘BEDBUGS!’  (They are currently scouting for a suitable theatre to mount the show off-Broadway – and when they get dates locked in, I’m booking my flight to New York, baby!!)

But back to my show. The character in “Phoenix” is an absolute egotist who has unswerving self-belief (which I do NOT) – and I thought it would be fun to have this character in the show, as a foil to the more self-effacing side of myself. I decided to go with the concept of an alter-ego or evil twin, called Trashtastika (which is a name I’ve used for years, from LiveJournal account to Twitter handle to DJ name, and now, blog!) To see the comedic potential of the song, see Dan Micciche or Brian Charles Rooney sing it .

I, of course, changed it from a ‘he’ to a ‘she’, and took it up a notch, to the key of B major. Paul even kindly transposed it for me – these guys are so lovely, I tell you! And they’re going to be big some day.

The other song I’ve decided to do is “The Stuff” from the musical Reefer Madness! Only I’ve changed the words so it’s not talking about mary j but about possessions & consumerism & the inability to stop shopping.  It starts: “I ought to leave it, but my job gives me pay, to buy stuff”.  And so it is a Materialist’s Lament.  If you’d like to check it out, see Ana Gasteyer sing “the Stuff” in the film of Reefer Madness.

Both are comedy songs, which I believe will cover me if I hit a bum note here or there, and they give me a lot acting-wise to work with. I’m still deciding whether to do a more serious, thoughtful song for my third, or go “what the heck” and just do another funny one. We’ll see what advice I get at the Cabaret Summer School.

Finally, I’ve just about decided to then return to Adelaide at the end of February to catch one week of the Adelaide Fringe Festival. I’ve never been, but it’s one of the most diverse arts festivals in the world!  For those who don’t know about it:

Adelaide Fringe literally takes over the entire city with 900 events staged in pop up venues in parks, warehouses, lane-ways and empty buildings as well as established venues such as theatres, hotels, art galleries, cafes and town halls.

What differentiates Adelaide Fringe from many other Fringe Festivals in the world is that alongside the ticketed open access program are the Fringe produced and/or supported special free events, which run throughout the program. These events add to the carnival atmosphere that engulfs the entire city and include the Fringe Parade, Adelaide Fringe Street Theatre Festival and Fringe in the Mall.

And that’s enough for one blog post! Merry Xmas, anyone who happens to be reading this!!