I’m just back from my whirlwind tour of the US & Tokyo – first stop – HAWAII!!

My first 2 visits there, I did what everyone else does and stayed in Waikiki, shopped and ate (with the exception of venturing downtown one night for a punk gig – but I digress).

This time I wanted to check out a place and phenomenon that I’d read a tiny bit about – Kaka’ako. Words like “edgy”, “gritty”, “eco” and “boutique” don’t usually come to mind when you think of Oahu…well, not unless you’ve strayed into Kaka’ako, anyway! Not that you’re likely to just stumble onto it; I had to go looking for it, intrigued as I was about this area of urban renewal. 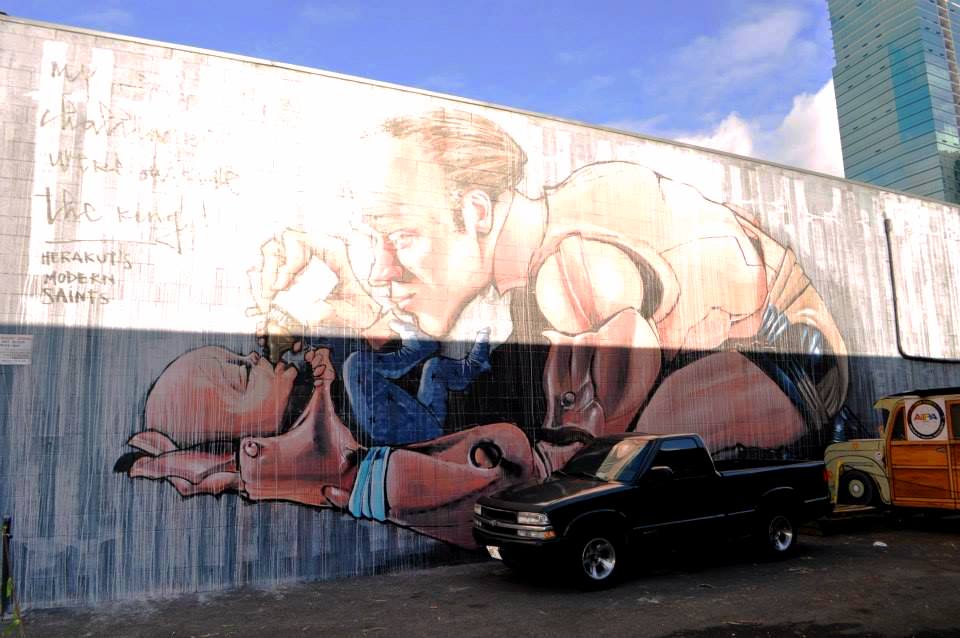 Kaka’ako is north-west of Waikiki – like an hour’s walk (I don’t drive, so used the old plates of meat to get around). It’s south of downtown/Chinatown and is bound roughly by Pensacola St, S King St, South St and the Kaka’ako Waterfront Park.

Kaka’ako is a mixed zone community that once was purely the bastion of warehouses, mechanic shops, garages, factories, and industry in general. As you walk around now you still see a lot of that. 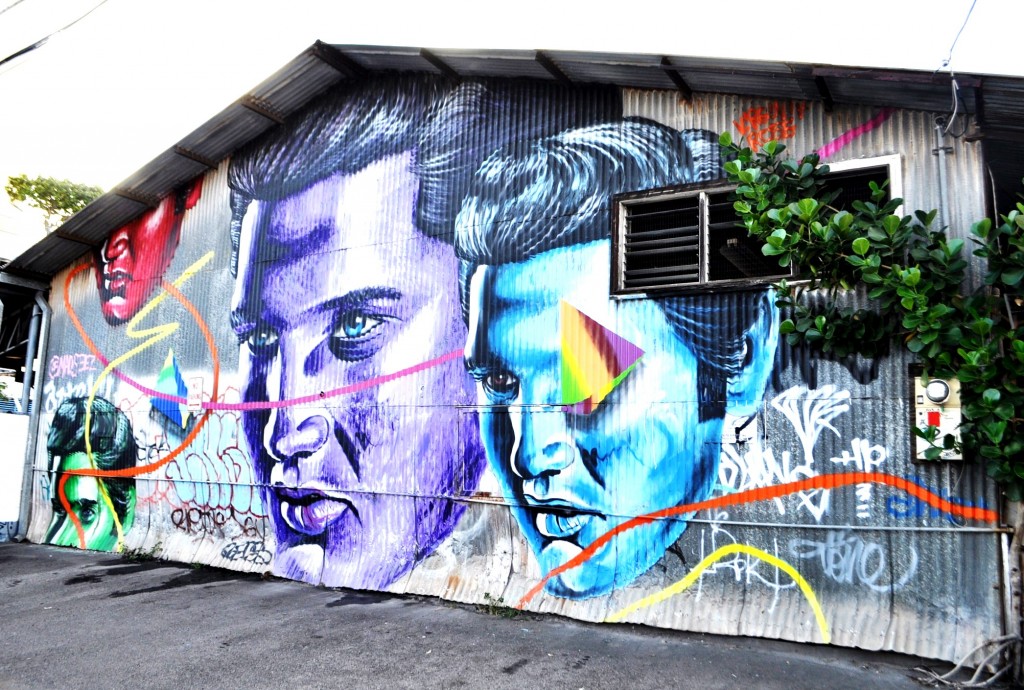 But in amongst that, there is now a whole new vibe taking over, with cafes taking up residence (like Cafe Duck Butt 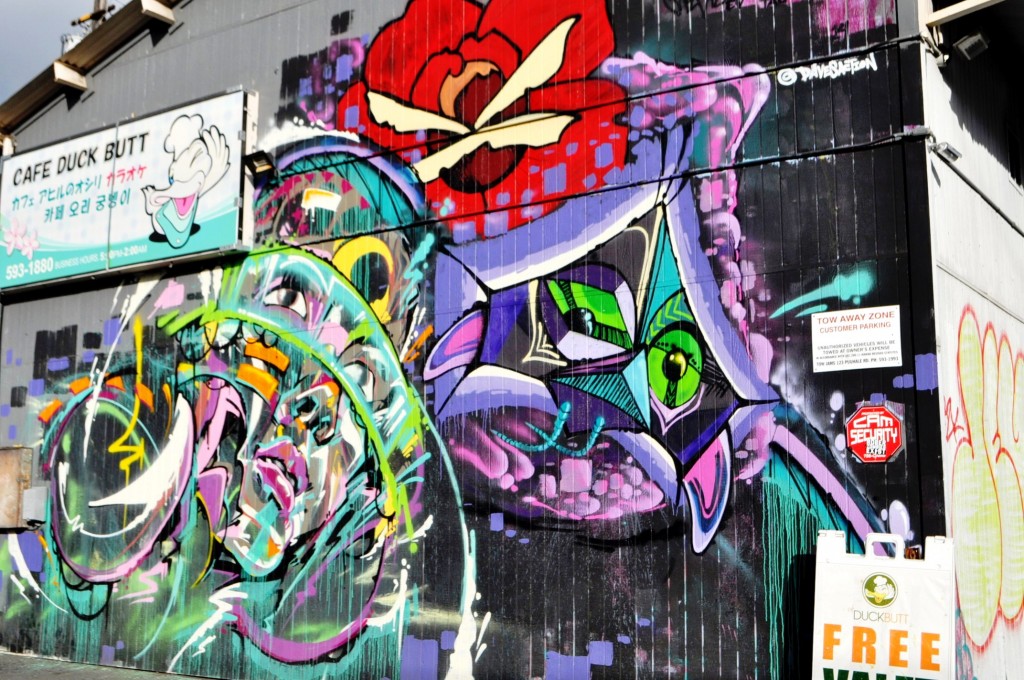 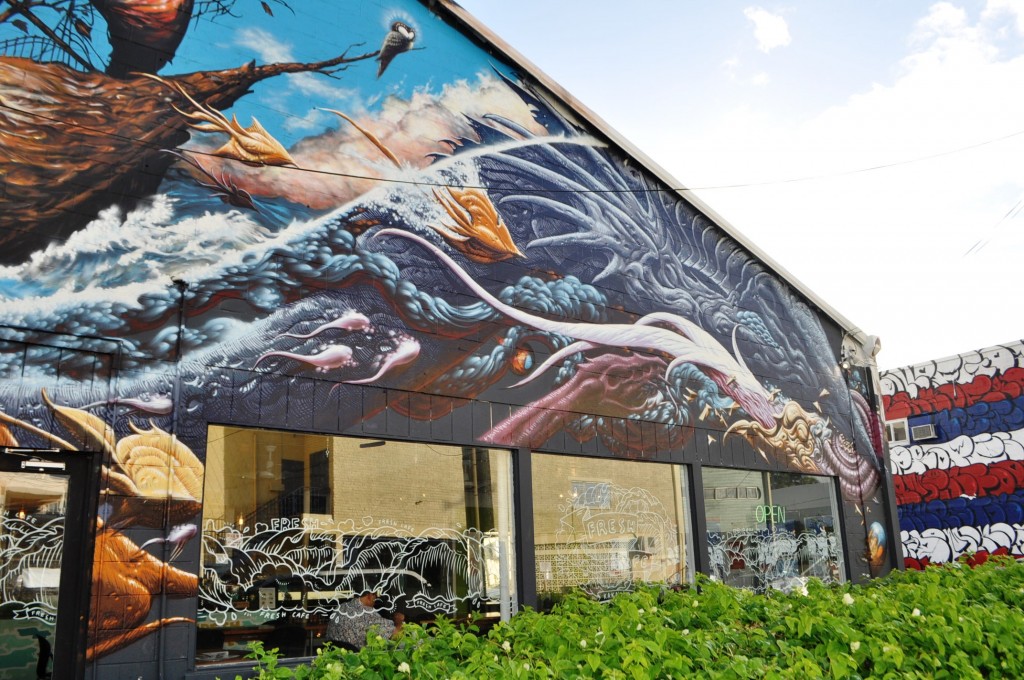 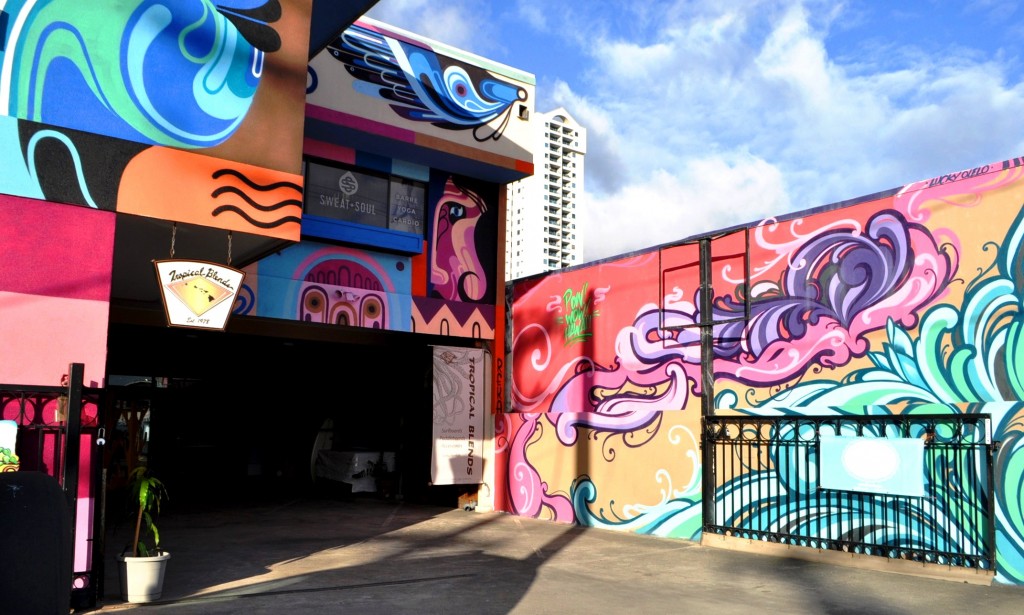 …and even a microbrewery!!

People are taking up residence here, and so all the services that make a suburb liveable are springing up and making this a very lively and happening part of town. It has been called the Williamsburg of Hawaii – although thankfully, I saw no hipsters with bushy beards!! I DID, however, see evidence of a pro-cyclist movement – with a nod to Portland 😉 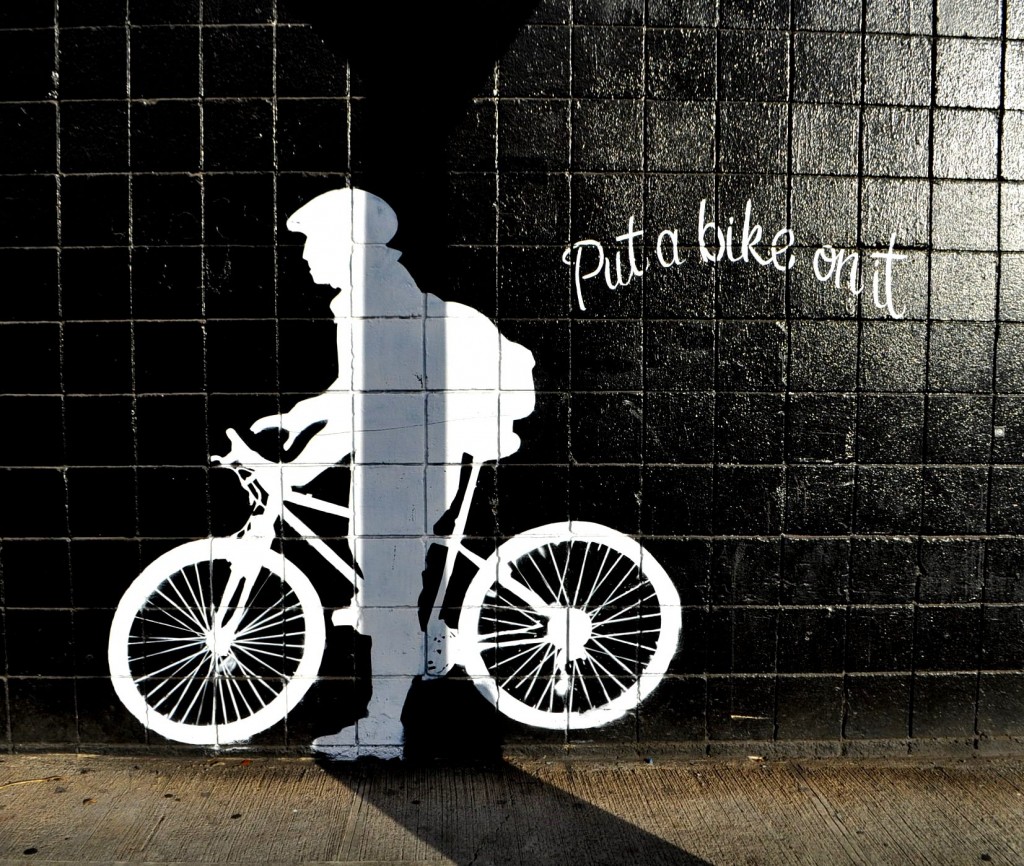 Art. Or more precisely, street art. Everywhere you look, there are astonishingly complex, intriguing and beautiful works of art, on buildings, walls, and even the food trucks. I wish I had known before I went that there is a guide to all this, but I had to trot it out myself and discover as I walked along. I have not seen such a concentration of street art anywhere previously, despite living in Sydney’s Newtown, and having visited inner city Melbourne, as well as New York and Berlin. 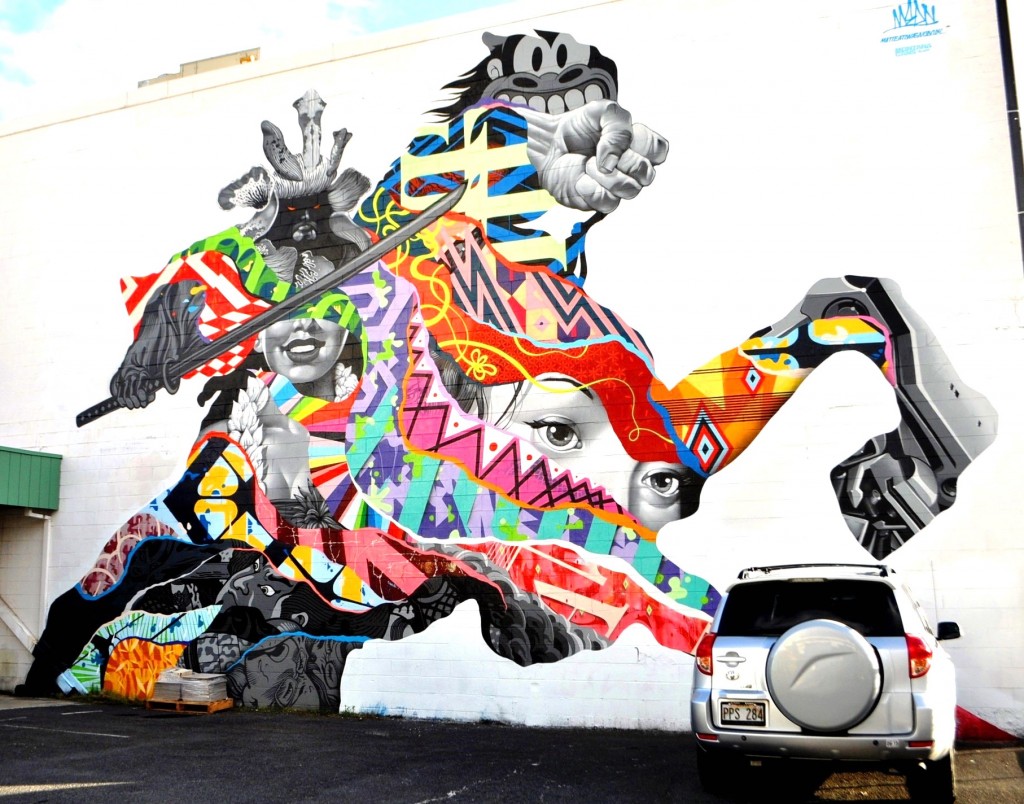 I was taking a photo from the street of a mechanic’s place with great graffiti on the wall, and a guy came over and said, “come on in and take a proper look”. As I did, we chatted, and he told me about all the famous street artists from around the world who have come here to paint. Then he said, “check out Pow Wow Hawaii!”. Who the what now? 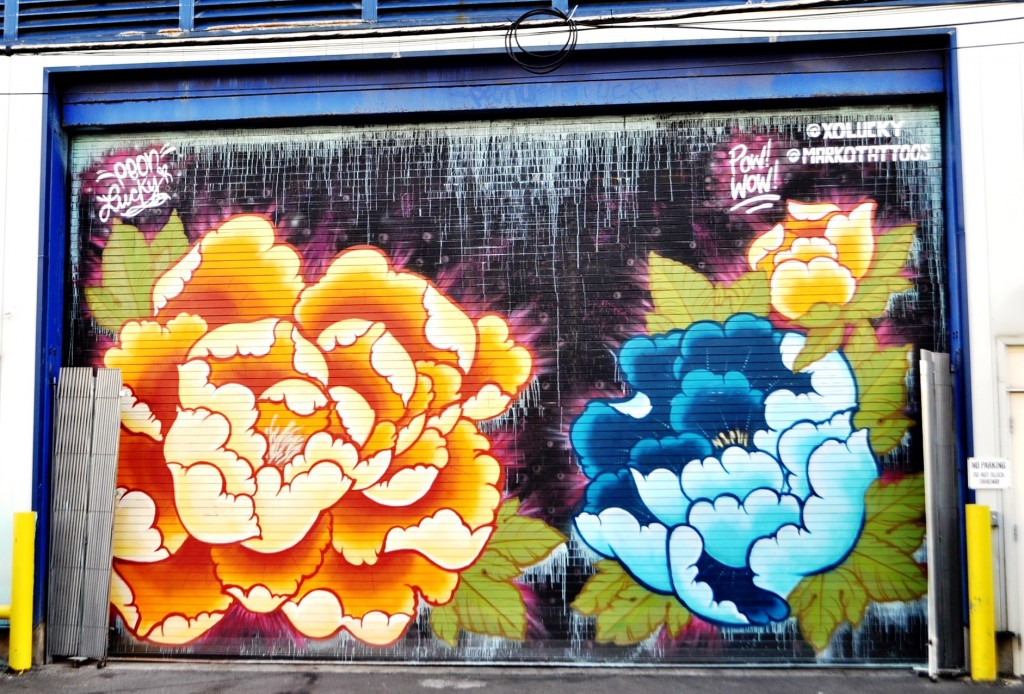 Pow! Wow! Hawaii is an organisation that fosters the street arts, or more properly a movement that is helping to propel street culture into the forefront of the modern art movements worldwide. Clearly, it is based in Kaka’ako.

POW! – It’s the impact that art has on a person.

WOW! – It’s reaction that art has on a viewer.

Together they form POW WOW, which is a term that describes a gathering that celebrates culture, music and art.

Centered around a week-long event in Hawaii, POW! WOW! has grown into a global network of artists and organizes gallery shows, lecture series, schools for art and music, mural projects, a large creative space named Lana Lane Studios, concerts, and live art installations across the globe.

Pow Wow even has a mural map for your enjoyment, with the locations pinned as well as the artist’s name, and sometimes the year. 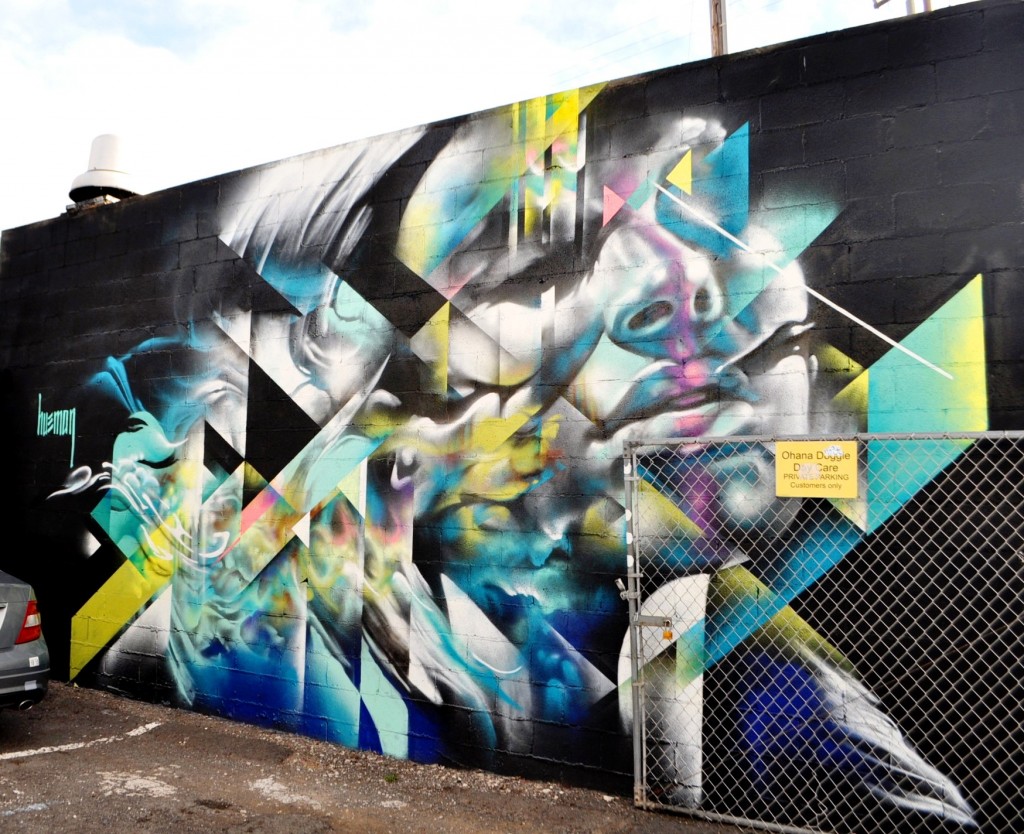 Here is a gallery of some of the other the art works that took my fancy the most:

[Not a valid template]

I started walking west of the Ala Moana Center until I hit Queen Street (the southern part of Pensacola Street), and then I just started wandering. For a girly girl like me wandering alone, all the car repair places and dingy warehouses etc were a bit offputting, but once I got hit BAM! in the face with my first piece of street art, I was like a hound who’d picked up the scent, sniffing out the next urban diamond in the rough.

Yes, there was a street or two where I’d see homeless dossing on mattresses, a bloke peeing in the street, or a girl coming out of a guesthouse a little the worse for wear on some amphetamine or other. Many streets had almost no-one on them…but I got there around 5, and a lot of businesses may have closed for the day. I didn’t ever feel in danger as such; just quickly exited any street where my intuition told me not to continue. Like any urban setting, it’s not squeaky clean and you will find the same vices as any city (the least of which were the strip joints which seemed plentiful here!)

But to me, this was way more real than the plastic Disneyland that is Waikiki Shopping area, where everyone is clean and nice, and middle class, and pushing along baby prams, while discussing which restaurant chain to (over)eat at, or mass-produced fashion store to check out.

Why else would you go?

Once a year, the Pow! Wow! festival wraps with the Honolulu Night Market – a street party that stretches for two city blocks, with live music, street food, skateboarding, art, and stalls. It’s the biggest night market of the year – so February is a good time to go – especially if you’re escaping the northern hemisphere winter!

But the night markets are on every month. On the third Saturday each month from 6 pm to 11 pm, artists and designers set up their wares on Cooke Street between Pohukaina and Auahi streets in Kaka’ako. Check out up and coming fashion designers as well as visual artists. 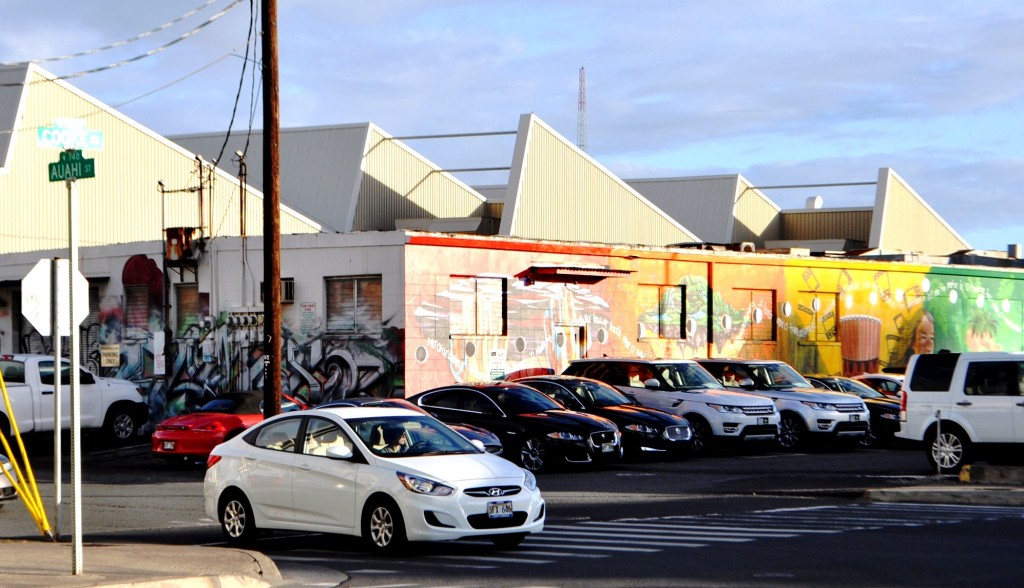 Set in the Ward Warehouse the Kaka’ako Farmers market can be found on Auahi Street, between Ward Avenue & Kamakee Street. There’s plenty of fresh locally-grown fruits and vegetables, cheese, meats, flowers, as well as yummy cooked delights from local businesses.

I love their ethos:

We are dedicated to the local grower. We do not allow any produce from the mainland, China or elsewhere to be sold at our market. We are committed to creating and utilizing more sustainable agricultural land, and believe that through supporting local agriculture and the local economy, that more lands will be made available to the small farmer. This is a benefit to our entire island- as the less we must import, the better. We require that all the people selling produce at our market be growers themselves.

But get there early; they’re open Saturdays, 8am – 12midday!

I mentioned a microbrewery before…well Honolulu Beerworks is one of a handful in Oahu. More than a dozen craft beers are brewed on site and available on tap. Opened in an old warehouse, it still has a rustic, semi-industrial feel, with a view through from the bar to the brewing tanks.

On the same theme, Real a Gastropub (as it says itself) is “Hawaii’s first beer-centric pub dedicated to providing the largest and finest selection of high quality craft beers sourced from all corners of the world and the Hawaiian Islands featuring 29 constantly rotating taps, 2 beer engines, over 250 bottles and a full cocktail bar”.  As for the food? “REAL food is beer-centric, local, seasonal and freshly prepared focusing on innovative, quality driven, comfort cuisine”. Sounds good!

The BREWseum is (as the clever name suggests) a museum that grew into the business of brewing hand-crafted beverages. They have six draft beers on tap in addition to various wine and sodas to drink, with complimentary popcorn (and food you can order too).

Two doors up at 909 Waimanu Street is a unique WWII private museum boasting a 1945 Ford Jeep and 1942 WLA Harley-Davidson, both used in the movie Pearl Harbor (2002). The Wiki Waki Woo is upstairs, a one-of-a-kind nostalgic tropical tiki bar and lounge with some of the best local craft beers on tap. WWII enthusiasts will enjoy their collection of antiques, artifacts and memorabilia.

Eat the Street is a monthly festival of food trucks and street food, running on the last Friday of each month from 4 to 9pm at Kaka’ako Waterfront Park.

4 years running, Eat The Street features over 40 food vendors each month and attracts over 7,000 people eager to sample the best street food Hawaii has to offer!

Just slightly north of Kaka’ako, but channelling the same artsy vibe is the event: 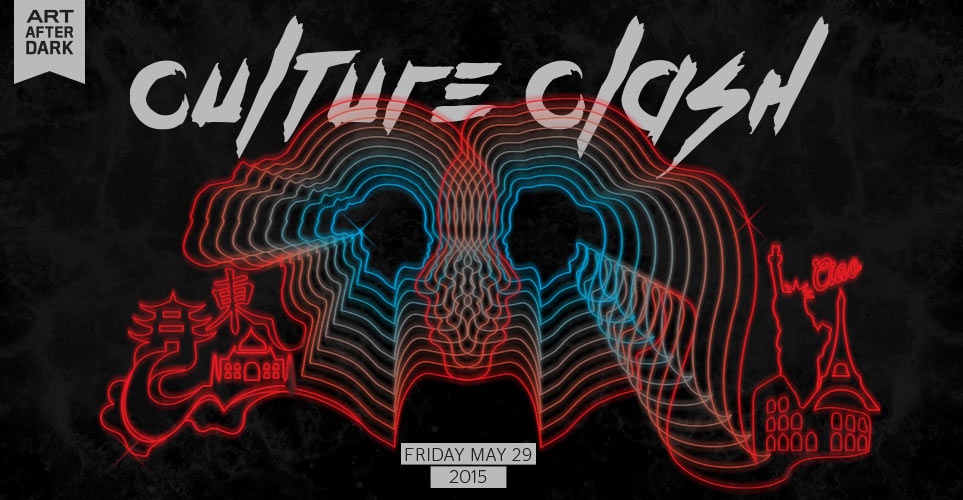 Food and drink vendors (including the craft breweries) keep the punters happy as they stroll in the open air learning about not just traditional arts but also body painting, calligraphy, Japanese comedic performing arts,  and participating in art activities. DJ’s and bands entertain partygoers and showcase up and coming music artists.

What else do you need to know?

The downside to this renewal is that, as more people want to live there, more development takes place. Everywhere you look, there are cranes, and skyscrapers towering over the original industrial low-rise occupants.  Let’s face it: this area is prime real estate, nestled as it is between downtown and Waikiki. More and more luxury high-rise condo’s are going up, and it remains to be seen how much of the area’s character will survive in 5, 10 or 20 years. There are still a few old colourful (possibly chinese?) shopfronts for example, but they are faded and boarded up, and one wonders if they’ll disappear altogether. 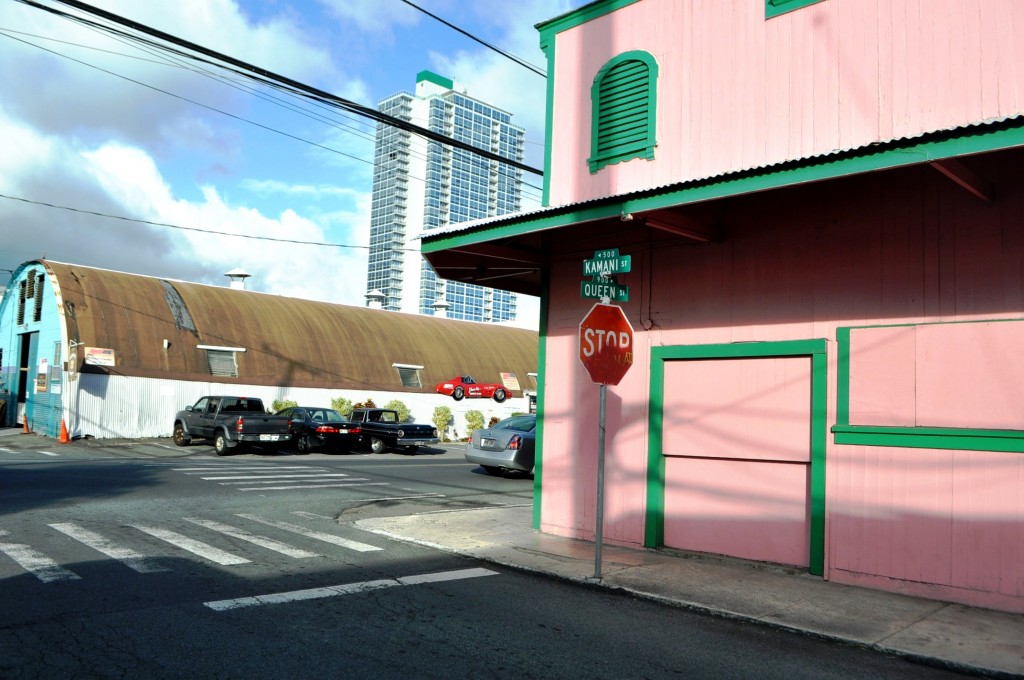 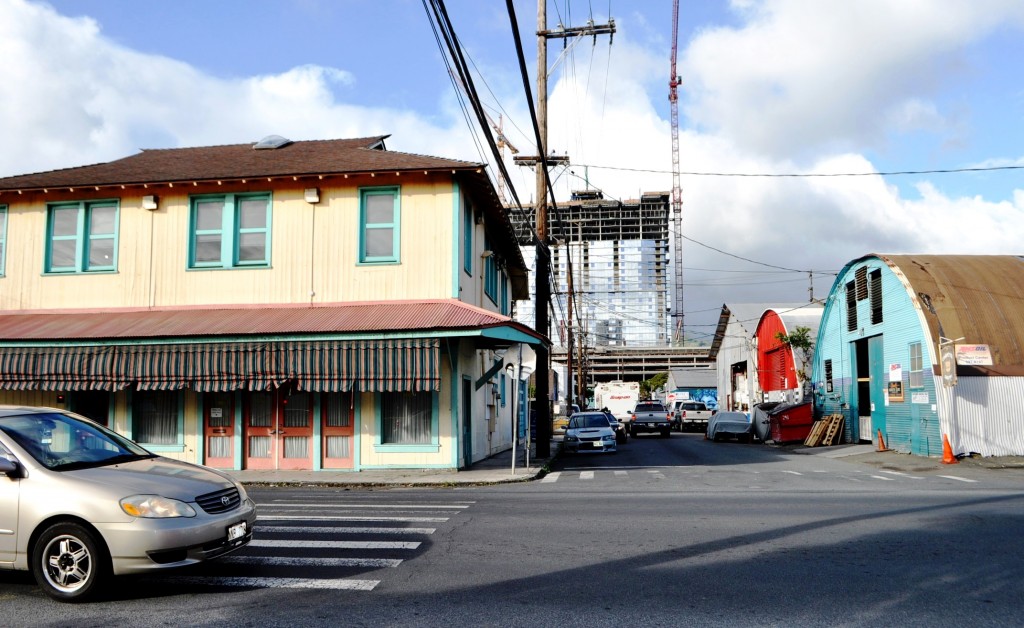 Our Kaka’ako says it will provide 2,750 housing units, 550 of which will be reserved for workforce housing.  Six residential towers will be built, each wrapped with lower-height residential townhomes and apartments as well as commercial space on the ground floor.

That’s just one development. As Honolulu Hi 5 points out:

No question. Kakaako will be Hawaii’s fastest growing and most exciting new urban neighborhood for some years to come, undergoing a major transformation and rejuvenation. Famous Ala Moana to the east (bordered by Piikoi St), Downtown Honolulu to the west (bordered by Punchbowl St) and the ocean to the south, make for a very convenient location with shopping, beach and business all close by.

About twenty brand new high-rise condos are planned, or already under construction, in Kakaako, with some sold out long before work even started. These projects will include up to 5,000 units. The ambitious Kakaako master plan also includes new pedestrian-friendly zones, parks and retail shops around a central modern elevated rail system connected to the rest of the island.

Kakaako is currently home to about 12,000 residents living mostly in scattered high rise condos in an otherwise underdeveloped district of urban Honolulu. Major job centers, shopping, entertainment and recreational opportunities are all close by.

While undoubtedly this will bring good things to the area, with greater facilities, leisure zones, and transit options, at some point will the colourful vibe of the place be replaced by the blandification of urban planning? Time will tell.  The next 5 years will see the area becoming more liveable, but in 10 years it might be just another slightly artsy middle-class suburb.

My tip? Visit now, while you can.